The ambitious goal of the In10Did project is to get the system integrated with other devices. The first target is the needy mobile phone market, currently stuck with sub-standard, thumb-blowing solutions for typing on the go. In this crusade for reform I wish Mr. Rasanen well, though I tend to doubt that any real-world phone maker would ever take a chance on something so radical.

The second part of the In10Did vision goes further, imagining a world where In10Did keyboards are embedded into everything: The arms of your easy chair; your video game controller; the ATM downtown – perhaps your toaster? These ideas become plausible because of the fact we discussed earlier: If you use In10Did with all of your fingers there is effectively no key layout, so typing on your video game console would be the same experience exactly as typing at your desk – or for that matter on a picnic table, through your special In10Did gloves.

In10Did is an interesting idea, and I enjoyed the opportunity to try it out. If you would like to get a prototypical In10Did keyboard, a limited number of the devices are available directly from the company through their eBay store. Keep in mind that the current model is of rough construction and really only suitable for experimenters. The next round has better buttons planned, and wireless connectivity soon after that.

I love to try something new – particularly when that something is a keyboard or mouse. So, when inventor Wayne Rasanen offered me the chance to test his company’s latest prototype, the mobile In10Did keyboard, I took him up on it. The unit I received is sort of a miniaturized cross between the Alphagrip and the new European Yogitype. But the particular design isn’t as important as the thinking behind it, which could open up many new possibilities in the world of keyboards.

Rather than referring to a specific device, “In10Did” refers to a chorded keyboard system developed by Wayne Rasanen. Chorded keyboards, which make many letters with few keys, are nothing new. The first stenotype machine, a kind of chorded keyboard still in use today by courtroom reporters, was developed in 1830. Other versions of the idea, such as the Frogpad, have been developed for use with computers.

In10Did differs from others in that its chords consist of only two button presses each, maximum. Thus, with ten buttons – one for each finger – you can make 100 different inputs. That’s enough to cover virtually everything on a QWERTY keyboard. Since there are only 10 buttons on an In10Did keyboard, it is not necessary to remember any key positions as with QWERTY or another standard layout. Instead, the user must memorize finger combinations.

The first ten letters of the alphabet are easy enough, corresponding to single keypresses by your ten fingers. The next sixteen start to get more complicated. To make the alphabet’s eleventh letter, for instance – K – you hold down the red right-thumb key and press the right index finger. Space, backspace, and shift are made with different combinations of the thumb and index finger buttons. Once you get to numbers and punctuation, things start to become really weird.

Read our full review on this interesting device. Below is a video overview. 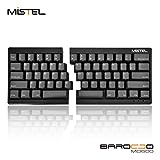 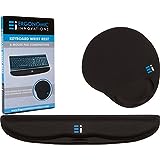 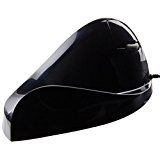 Kealoha
Hi, I’m Kealoha, an American engi-nerd. I’ve designed dozens of software systems for Fortune 1000 companies worldwide and institutions like MIT’s Digital Media Lab. I started to get carpal tunnel syndrome early in my career and a total
switch to ergo products has completely eliminated any pain or discomfort despite decades of crazy hours behind screens. I hope you too weave in a bit of ergo into your lives.